Your God Is Too Weak 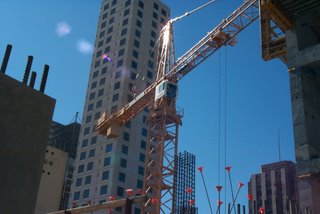 Some time back there was an amusing sight in the main street of a New Zealand city.

Driving along, on the right side of the street there was a skyscraper in the process of being built. It was a hot day in the middle of summer and the crane was in operation. On the end of its hoist was not a big packet of timber nor a giant steel beam but a pair of basketball boots!

The crane operator had manoeuvred the crane so that it went over the street. He then lowered his little load so that his boots got dunked in the city fish pond. Then after they were cooled, he hoisted them back up and presumably put them on.

Now what an amazing contrast! A huge crane, capable of lifting a gigantic weight, but used instead to hoist a pair of basketball boots.

Now isn't that what we do a lot of the time?
We have this mighty power of the Holy Spirit available to us.
This power is capable of lifting people's burdens and hoisting hang-ups from people's lives.
This power of God can help reconstruct people and build a brand new society but so often all we use the Holy Spirit for is to make us feel good, to cool us down a little bit and to make us feel more comfortable.

Source: Heard in an address by Graham Brogden, circa 1987. Thanks Graham!