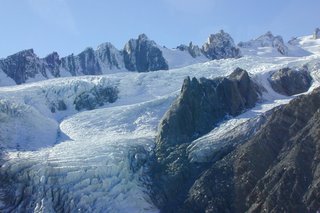 Rick Bass, a very good writer, lives in Montana and is a fervent environmentalist.

Bass wrote an essay in which he said that when confronted with a complex and difficult task, he used to imagine himself laying down one brick after another, brick by brick by brick, to eventually accomplish his aims. But he's recently changed his metaphor from bricks to glaciers. A glacier is the most powerful force the world has ever seen. Literally nothing can stop a glacier.

Bass notes that one theory about the origin of glaciers is that they are "the result of a wobble, a hitch, in the earth's rotation. . . . Glaciers get built or not built, simply, miraculously, because the earth is canting a single one-trillionth of a degree in this direction for a long period of time, rather than in that direction."

And then this comment: "When I am alone in the woods, and the struggle seems insignificant or futile, or when I am in a public meeting and am being kicked all over the place, I tell myself that little things matter—and I believe that they do. I believe that even if your heart leans just a few degrees to the left or the right of center, that with enough resolve, which can substitute for mass, and enough time, a wobble will one day begin, and the ice will begin to form, where for a long time previous there might have been none. Keep it up for a lifetime or two or three, and then one day—it must—the ice will begin to slide."