Hanging Out Our Dirty Laundry 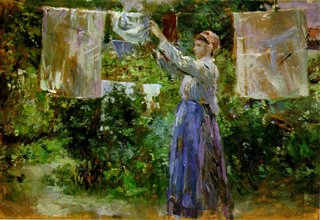 Laura Barnett and Sandra Spannan have recently set up shop on 44th Street in Manhattan. They are not selling anything but their temporary exhibition entitled ‘Inside/Out’, is a laundry mat with a difference.

Laura and Sandra are performance artists and they stand and sit in the shop window dressed in white, like nineteenth century washerwomen.

While Sandra does some portrait drawing of passers-by Laura will put her fingers to her lips and underline the words on the glass which extend the invitation: “Air your dirty laundry. 100% confidential. Anonymous. Free.”

Those on the other side of the glass are urged to pick up a pen and clipboard, write down their confession, seal their paper in an envelope marked ‘secret’ and drop it in a bucket on the pavement.

When the author is out of sight an assistant delivers the envelopes to Laura who reads the confessions and tapes them on the window for the world to see.

Passers-by stop in their scores to study the newly revealed secrets. This could be seen as a horrible case of venial voyeurism but it might also provide a necessary catalyst and grant permission to many to make their own honest confession.

Getting into the confessional spirit, author of this fascinating article, Kathryn Shattuck, admits, “It’s hard to resist the temptation to compare sins.”

One confession reads: “I am dating a married man and getting financial compensation in exchange for the guilt.”

Another statement says: “I make fun of my friend behind her back all the time.”

One person said: “The hermit crab was still alive when I threw it down the trash shoot.”

And then the cry from the heart: “I haven’t yet visited my dead parent’s grave.”

Like all dirty washing there are smalls and large, old and new, sexual and surprising. Some expressed anxiety that they were carrying in regard to real estate. One person confessed he had murdered someone years earlier.

Is this another incident of, “This could only happen in New York!?” Well, ‘No’! Laura and Sandra have offered this laundry service before with dry runs, not only in New York but in Berlin.

“The Germans were so dark,” said Ms Barnett. “It was like they had been waiting for us to come.”

My guess is that there are scores of people on our streets waiting for such an opportunity.

I went to a church last night that I hadn’t visited before. At one stage in the service the worship leader said, “Let us confess our sins.” In the next few seconds, amid the hundreds of people who were present, there was a cacophony of confession. Then came the liberating announcement of absolution, “You are accepted! You are forgiven! You are free!”

Such an opportunity within the church to confess our sins is so rare I get surprised when it happens. Karl Menninger hit the nail on the head with the title of his book that asks, ‘Whatever Became of Sin?’

Laura and Sandra’s temporary, makeshift confessional has done enough to highlight the truth that there are lots of stories waiting to be told. There are people on our streets longing for the healing that comes when we make our confession in honesty and in trust.

So, what’s in our washing basket and how might we provide the opportunities for us all to hang out our dirty linen?

Image: The painting, ‘Peasant Hanging out the Washing’, by Berthe Morisot, 1881.
Posted by Geoff Pound at 12:07 PM