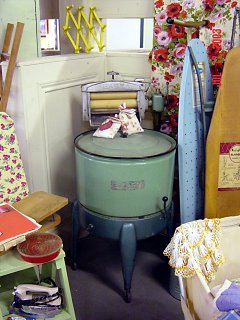 When John Claypool died in September 2005 there were scores of tributes written and spoken about the impact he had had on countless numbers of people. One of the recurring memories of what John had said in his sermons and his books was that life is gift.

In his book, Tracks of a Fellow Struggler, written after his daughter Laura Lou died of leukaemia, John Claypool, told this story that helped him to understand and work through his grief. At that difficult and dark time, this story was awakened from his childhood. He has told it many times and with different applications:

“We did not have a washing machine during WWII and gas was rationed. It was going to be a real challenge. At about that time one of my father’s younger business associates was suddenly drafted into the service. My father offered to let them store their furniture in our basement while he had to be away. Well it so happened that they had an old grey Bendix washing machine. And as they were moving in, my father suggested that maybe they would let us use their machine in lieu of our letting them use our storage space. So that was how it happened to get to our basement. The next question became, who is going to become the wash person in the family?

In that mysterious way that families assign roles, I became the wash person at the grand old age of eleven! For the next four years, I had a ritual every Tuesday and every Friday. I would come home from school, gather up the wash, take it down into the basement, fill the old Bendix with water, put in the clothes, put in the soap, and then watch as the plunger would make all kinds of configurations of suds. It had a hand roller that you could take the clothes once they were finished and you could wring them out. I can remember as a child trying to stick my finger and see how far I could go without it cutting off circulation. In other words, I became affectionately bonded to that old mechanism in those four years.

When the war was over my father’s friend came back. One day when I was at school, a truck came to our basement, took out all of their things, including the washing machine, and nobody had told me. It was a Tuesday. I came home and gathered up the clothes, went down in the basement, and to this day I can remember my sense of horror as I saw that empty space where the old Bendix had been. I put down the clothes and rushed back upstairs and announced loudly, "We have been robbed! Somebody had stolen our washing machine!"

My mother, who was not only a musician but also a wise human being, sat me down and said, "John, you’ve obviously forgotten how that machine got to be in our basement. It never did belong to us. That we ever got to use it was incredibly good fortune." And then she said, "If something is a possession and it’s taken away, you have a right to angry. But if something is a gift and it’s taken, you use that moment to give thanks that it was ever given at all."

That was the memory that resurfaced that night for me. I remember thinking that Laura Lou was in my life the way that old Bendix washing machine was in our basement and I heard the voice of my mother say, "If it is a gift and it’s taken, you use that occasion to give thanks that it was ever given at all." And that memory helped me to decide that night to take the road of gratitude out of the valley of sorrow. The Twenty-third Psalm speaks of walking through the valley of the shadow of grief. I would suggest to you that the road of gratitude is the best way I know not to get bogged down in our grief but to make our way through it.

Therefore, the part of the Bible, that became my Bible was that old story that taught me that life is gift, that birth is windfall, that all, all is grace. And I give you the gift that was given to me and I pray that somehow the sense of life as gift will enable you to make a brave and hopeful journey, not just into the valley of the shadow of bereavement, but through that valley to the light on the other side. May your journey be a brave one. Amen."

Image: Old washing machine [I don’t think it is a Bendix!]
Posted by Geoff Pound at 12:24 PM