Why Not The Best? 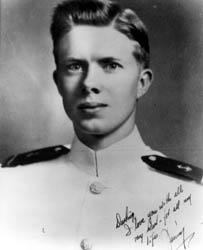 Before Jimmy Carter was elected President of the United States he wrote a book in which he told about his graduation as a naval officer.

After finishing his training he applied for a job in the navy. He was interviewed by Admiral Rickover who was a man Carter greatly admired. The admiral was a demanding officer who said to him: “Where did you come in your class in the Naval Academy?” With a measure of pride Carter said: “Sir, I came 59th in a class of 840!”

Jimmy Carter said he expected to be showered with praise but instead he was confronted with the penetrating question: “Did you do your best?”

Carter was about to reply almost automatically with his, “Yes Sir” but he thought about it for a moment and said, “No, Sir, I didn’t always do my best.”

After a long awkward silence, the Admiral said: “Why not?!”

Jimmy Carter entitled his book, Why Not The best? and later it became the theme of his presidential campaign.

It is an important question that has relevance for us today.

Image: Naval Officer Carter.
Posted by Geoff Pound at 11:03 AM