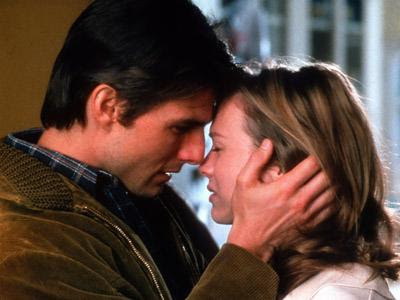 Parts that Didn’t Have Names
In a New York Times article about actors who play the minor roles, Stephen Tobolowsky gives a superb tribute.

Here is a taste to encourage people to read the entire article:

I am a character actor: the perfect combination of ubiquity and anonymity.

What makes the character actor different from our brethren who handle the leading roles?

My fellow actor and writer Larry Miller described it perfectly: “The definition of a character actor is anyone in the movie not kissing Renée Zellweger.”

I tend to think of it a little more scientifically. There is one thing that character actors have in common: we have all played parts that didn’t have names.

When you are Harrison Ford you play Richard Kimble or Han Solo. You have a first and last name, and the writer has thought enough about you to give you a life. Harrison Ford’s characters eat, sleep, drink coffee, shave, shower (from the back only, waist up), read the newspaper, get dressed, drive to work, run for their lives, shoot guns, deliver stirring oratory to alien warlords and possibly kiss Renée Zellweger — all because they have been named.

The only difference is that the parts with no names have been somewhat abandoned by the screenwriters, so it is the job of the character actor to bring substance to the role. That may take imagination, research or just plain prayer. But it has to be done. The character actor has to bring the complete person to the set, ready to roll with the punches.

The Lead and the Support
My first day on “Groundhog Day,” Bill Murray shook hands with me and said, “Hello, nice to meet you — now show me what you’re going to do.” I jumped into a few enormously energetic moments of Ned Ryerson and Bill held up his hand. “Fine, fine, you can do that,” he said. “It’s funny.” Bill walked away.

I then asked the director, Harold Ramis, if I should play Ned a little more down to earth. Harold laughed and said: “No. Bill is the lead. He’s the stew. When you are a supporting character, you are the spice in the stew. Have fun.”

Every Part an Opportunity
Maury Chaykin was the epitome of the spice in the stew. One night in Montana, when Maury and I were shooting the family comedy “Josh and S.A.M.,” we were chatting as we waited for the cameras to get ready. Maury was playing “Pizza Man” with his usual deranged flair. I asked him how he was enjoying the movie. He shrugged and said: “It’s a part. Every part is an opportunity.” I asked, “An opportunity for what?”
Maury grinned like the Cheshire Cat: “I guess we’ll find out tonight.”

The Blessing of Anonymity
Like Maury and the rest, the very best character actors are made of equal parts discipline and madness, and the fact that our faces are more familiar than our names is not our curse, but our blessing.

The character actor’s goal, after all, is not to earn the adulation of the public; it is to give lives to a hundred nameless spirits who make us laugh or cry, who are both familiar and new, who show us that their journey is our journey, and who, like everyone in the audience, never get to kiss Renée Zellweger.

The Key Ingredient to Every Organization 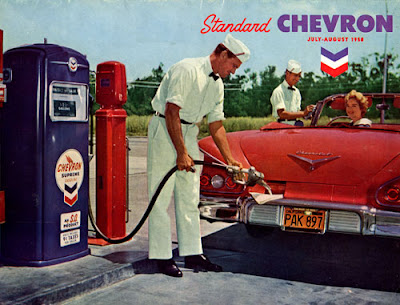 A young fella rushed into a service station and asked the manager if he had a pay phone. The manager nodded, "Sure, over there."

The boy pushed in some change, dialled, and waited for an answer.

Finally, someone came on the line. "Uh, sir," he said in a deep voice, "could you use an honest, hardworking young man to work for you?"

After a moment or two the boy said, "Oh, you already have an honest, hardworking young man? Well, okay. Thanks just the same." With a broad smile stretched across his face, he hung up the phone and started back to his car, humming and obviously elated.

"Hey, just a minute!" the station manager called after him. "I couldn't help but hear your conversation. Why are you so happy? I thought the guy said he already had somebody and didn't need you?"

The young man smiled. "Well, you see, I am the honest, hardworking young man. I was just checking up on my job!"

“Honest, hardworking employees are tough to find, and when you toss in competence, a positive attitude, teachability, punctuality, proper attire, a team spirit, loyalty, confidentiality, honesty, and an ability to get along well with others, wow! No wonder every boss I talk to answers my question "What is the key ingredient of your organization?" the same way: PERSONNEL.”

Geoff Pound
Posted by Geoff Pound at 3:45 PM Links to this post 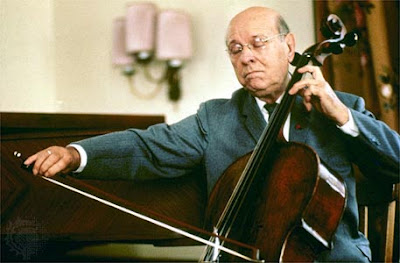 Jay O’Callahan, in his talk on the Power of Storytelling highlights the value of appreciations.

My friend Doug Lipman has a wonderful book called The Storytelling Coach.

He talks about listening, appreciations and suggestions in time but he has this story about a cellist who desperately wanted to meet Pablo Casals, the great master.

The young man found himself at a Mendelssohn party and present was the great man Pablo Casals.

The young man was so nervous he made a lot of mistakes and he felt awful. But Casals said, “Bravo! Bravo! Bravo!”

The young fellow made more mistakes than he’d ever made and Casals said, “Ah! Wonderful! Now, the Bach! The Bach!”

And at the end the old man hugged him and said, “Good! Magnifique!”

The young man left feeling humiliated and he thought that Casals, the great master, pretended to like me.

Years went by and the two of them got together in Paris. They had dinner and they went out and played duets together.

The young man now had the courage to say, “That night. You probably don’t remember but…You humiliated me! I did a terrible job.”

Casals was furious. He said, “Come over to the cello. Come over here.”

And Casals went through every piece and he said:

“That was all good. We have to leave it to the ignorant and the stupid to point out faults. We have to be glad of any bit of beauty.”

O’Callahan concluded, “Casals knew of the importance of appreciations.”

Related
Jay O’Callahan and the Power of Storytelling, SFS, 18 September 2010.

Image: “Casals knew of the importance of appreciations.”
Posted by Geoff Pound at 7:47 PM Links to this post

Jay O’Callahan and The Power of Storytelling 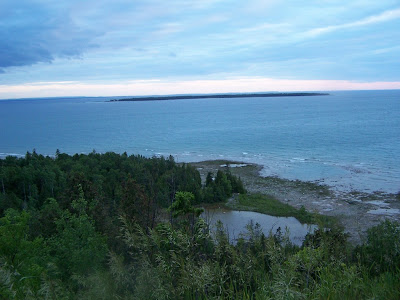 In a talk on The Power of Storytelling Jay O’Callahan tells this story to illustrate the power of images:

Years ago I was in Detroit and a woman came up and said:

“I want to tell you about my work.”

She said: “I’m working with children who are dying of leukemia. I was working with Jonathan who was eleven years old and Jonathan got very sick and he said, ‘When I die, cast my ashes on Lake Michigan.’”

“Well Jonathan died and his parents and Charlie, Jonathan’s five year old brother, went out on Lake Michigan. They had a nice, old, green boat with a motor and they cast Jonathan’s ashes.”

“They went out again and the Mother said, ‘Oh, it’s a monarch butterfly. It’s Jonathan!’”

“Another time they were on the beach and Charlie, the five year old had a stick and Charlie was stirring up the sand and an old grey moth flew up and he said, ‘Look! That’s Jonathan but he’s wearing a different shirt!’”

Jay O’Callahan concluded, “What an image for death—wearing a different shirt!”

He added, “I told that story on National Public Radio and Jonathan’s Dad called and he said, ‘You know, when Charlie said, He’s wearing a different shirt, that was the beginning of a long process of healing.

“An image was an agent of healing.”

Image: “They went out on Lake Michigan.”
Posted by Geoff Pound at 9:57 AM Links to this post

Jimmy Carter on the Most Enjoyable Time of His Life 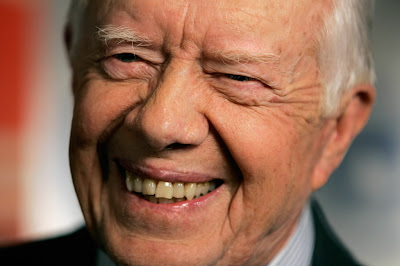 Carter thought for a minute, then flashed that famous smile and said, “Now!”

Image: “After leaving office, Carter and his wife Rosalynn founded the Carter Center in 1982, a nongovernmental, not-for-profit organization that works to advance human rights."

"He has traveled extensively to conduct peace negotiations, observe elections, and advance disease prevention and eradication in developing nations. Carter is a key figure in the Habitat for Humanity project, and also remains particularly vocal on the Israeli-Palestinian conflict.” Wikipedia, September 2010.
Posted by Geoff Pound at 10:53 AM Links to this post

Bill Maher: Interloper on the Hollywood Walk of Fame 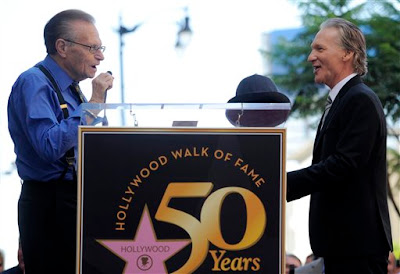 On Larry King Live, the evening after Bill Maher was awarded a star on the Hollywood Walk of Fame, King asked Maher how he felt:

MAHER: As something as mainstream and corny as that—I don't say that in a bad way—would include someone as out of the mainstream as me. I think that's terrific.

KING: So you feel like you're an interloper in a sense on the Hollywood Walk of Fame.

KING: Is that the way you felt when you saw the star?

MAHER: I felt that way when I saw the star and then about five minutes after everybody left, a homeless guy puked on it. So I…

MAHER: I mean that really put it in perspective, Larry.

MAHER: It's a humbling experience.

Stanley McChrystal and the Battle to Maintain Perspective 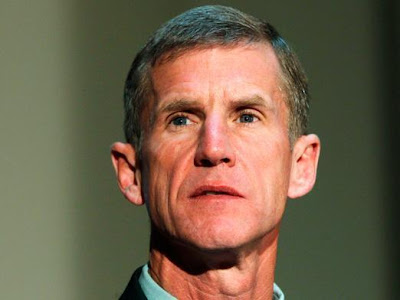 Stan McChrystal, the four-star US Army general who was fired in June 2010 from commanding the Afghan war because of his derisive comments, is now teaching a course on leadership at Yale University.

“It's a long way from commanding 100,000 U.S. and 30,000 allied troops in Afghanistan to commanding a couple of dozen students. But that's what happens when you can't command your tongue.”

Now, adjusting to the sacking and the transition to civilian life, Stanley McChrystal is seeking to keep things in perspective:

Geoff Pound
Posted by Geoff Pound at 7:04 AM Links to this post

Leonard Sweet on Looking for Peace 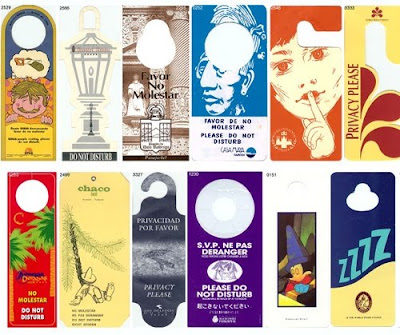 When you check into a Sheraton hotel room these days you have a new message you can hang on your doorknob to keep the housekeeper away.

Instead of "Do Not Disturb" the message now reads "Peace and Quiet."

People are not just looking to keep disruptions and disturbances at bay. They are looking to find something positive. They are searching in life for some "peace and quiet." Or if "quiet" is too much to ask, just some "Peace."

Geoff Pound
Posted by Geoff Pound at 6:50 AM Links to this post

Flinging Your Hat Over the Wall 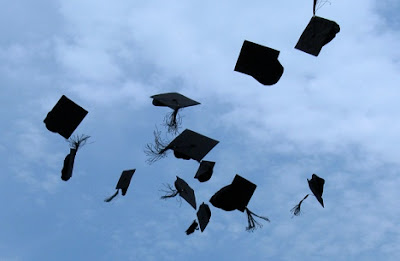 They journeyed over rivers and through valleys, past farms and flocks. When they got hungry, they’d help themselves to what God offered them through the unwitting generosity of local farmers.

One day, the boys came upon a high wall that guarded an orchard and blocking their path. It seemed impassable. For a moment, they considered turning back and ending their journey. Then, in a flash of unspoken agreement, they took their caps off their heads and flung them over the impassable wall. Now they had no choice but to continue.

Geoff Pound
Posted by Geoff Pound at 2:32 PM Links to this post