Words Can Never Hurt Me? 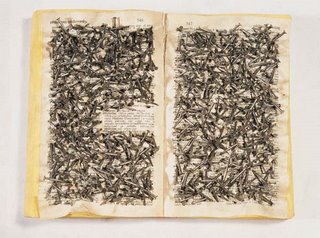 This artistic work is currently part of the Word into Art exhibition at the British Museum. Dictionary Work (1997) is by Khalil Rabah, the Palestinian artist who was born in Jerusalem (1961) and who now lives and works in Ramallah. Many of his works are about the theme of displacement, replacement or ‘feeling (a)part’.

This Oxford Desk Dictionary/Thesaurus (American edition) is covered with nails which obliterate everything except the dictionary entry: ‘Philistine’.

The definition alongside reads, ‘Member of a people opposing the Israelites in ancient Palestine. Person who is hostile or indifferent to culture. Vulgar, ignoramus, barbarian, boor, yahoo'.

Dictionary Work penetrates into Rabah’s contemporary context, however, its timeless message challenges the painful ways our words hammer at cultures, box people in and nail them to destructive, labels of lies.

Geoff Pound
Posted by Geoff Pound at 12:32 PM Links to this post 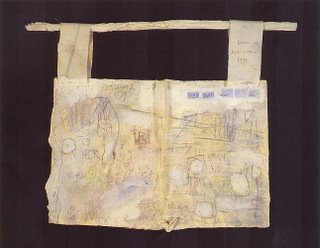 It is one thing to voluntarily move into other countries in the quest to be a world citizen. It is quite another to be forced from your home because of war and disaster.

The Iraqi artist, Said Farhan, is now based in Switzerland, after he and his family left the turbulence of his home country. In the Word into Art exhibition in the British Museum Said has contributed his creation, ‘Uncle Najib’s Suitcase’. This ‘suitcase’ is covered with signs, symbols and postage stamps. Farhan’s departure from Iraq with a suitcase of treasured possessions symbolizes the experience of exile for himself and others. It is an artistic work of the mundane objects that provide comfort when there is nothing else.

Farhan says, “Homes don’t travel. People hang onto their homes like snails to their shells. When people have to leave their homes there remains a scar at the very place where people and walls meet so closely.”

Image: Uncle Najib’s Suitcase
Posted by Geoff Pound at 8:35 AM Links to this post

Becoming Citizens of the World 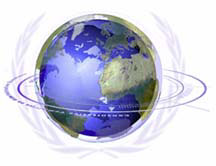 In June 2006 I sat with an interesting young man on a flight from London to Houston. When we put on our seat belts I said, “Where are you from?” He replied: “Are you ready for my answer” I said, “Sure.”

He said, “I was born in LA, I lived my teenage years in London, I’ve often stayed with my grandparents in the South of France, I have studied in Switzerland and I have just completed my training in Milan.” He had grown up in California speaking French in the home, learning English in kindergarten and Spanish later at school.

So I said, “What is your culture?” He said, “Are you ready for my answer?” After noting my nod he said, “My father is French, my mother is Moroccan, my grandfather is Greek and my grandmother is Italian.”

I reflected on this while he was sleeping and when he woke up after we had flown over Greenland I asked, “So, in what language do you dream?” He said, “English.”

When the airline steward was giving out the US immigration cards he asked my friend his citizenship to which he replied, “American and French.” Being told he had to choose one he said he would be American for this visit to get into the USA.

When I noted that Philippe had taken out a French magazine to browse he turned to me and said, “Sexy language isn’t it?” and I thought that’s one question that I didn’t need to ask.

As part of our meal time conversation I said, “You have lived in the USA, France, England, Spain, Switzerland, Italy, and now you are on your way to work in Mexico. Where is home for you?” He said, “Are you ready for my answer?” I said, “Philippe, I am ready for anything!” He continued, “I’m not trying to be arrogant but I genuinely feel that I am a citizen of the world.”

Philippe represents an increasing number of people (especially young people) today on this shrunken globe who move freely from culture to culture and are truly world citizens.

Then thinking about things global I asked, “Whoever do you support in the Football World Cup?” Without any hesitation he said, “Vive la France!”
Posted by Geoff Pound at 7:17 AM Links to this post