Christmas in All the Human Moments 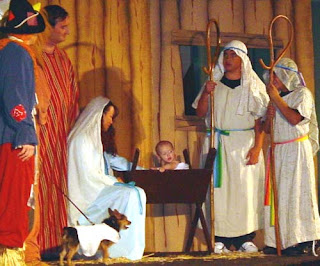 The Christmas Eve Service was supposed to start at 7.30pm and it was now 7.40pm and there was still no sign of the entrance procession. People were restless, the church was packed, the children were wound up with Christmas Eve excitement. A baby was crying hard, with the kind of build up and crescendo that usually makes parents bolt for the car park.

Near the front, an elderly woman in a red velvet dress said loudly, “That sounds to me like a very small child. Why on earth would they bring it out at night? ”

Suddenly the crying stopped, and the music began. Children costumed as shepherds, angels, wise men, Mary and Joseph led the entrance procession. Mary cradled a real baby, his face scarlet from the exertion of all that crying, a bottle stuck in his mouth. “Why, all that crying was Jesus! ” the woman in the red dress said loudly.

Before putting him in the manger, Mary lifted him to her shoulder and he let out a loud burp. Everyone burst out laughing. This was Jesus, crying and needing to be burped, experiencing first hand what life is like for us.

Source: Patricia Livingston, Daybreaks: Daily Reflections for Advent and Christmas, Liguori Publications. Thanks to Barrie Hibbert for the recommendation.

Image: “Before putting him in the manger, Mary lifted him to her shoulder and he let out a loud burp.”
Posted by Geoff Pound at 6:28 AM

Francis Ford Coppola on Looking into the Ashes of Adversity 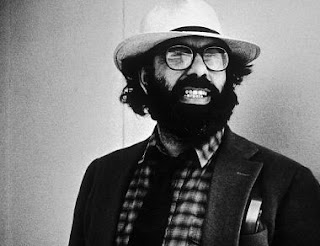 Francis Ford Coppola started his career making low budget films, and his first notable project, Dimentia 13, gained him some regional notoriety. With his star rising, he began raising money and investing personally in his own films. But this turned out to be a losing strategy when a subsequent film, Finean's Rainbow (a broadway musical adaptation) flopped, leaving Coppola deeply in debt. By the time Coppola came to Hollywood to interview for the director role of The Godfather, he believed that he would soon be forced to file for personal bankruptcy.

His interview was a success (and a welcome distraction from his other issues), and Paramount Pictures offered him the job. But his shaggy haired, "hippie" appearance did not win him many friends within the company, and he quickly came to blows with studio executives over his casting choices (Coppola fought hard to cast Marlon Brando in the lead role, but some studio executives much preferred Danny Thomas in the role of a "family man").

As the film went into production, Coppola struggled with the eccentric personalities of his cast (Brando would often insist that his fellow actors wear his lines printed and taped to their foreheads!), and his disagreements with the studio escalated. A group of high ranking Paramount executives grew determined to have him removed.

"Studios typically will only fire directors on a Friday or Saturday." Coppola told me. "This way, they can quickly clean up the mess, bring in the new director, and resume production on Monday. Someone had tipped me off that at the end of the week, the studio planned to fire me. So there I was, on the verge of personal bankruptcy, and certain I was about to be very publicly canned from a high profile job."

"I really didn't know what to do. So that Wednesday, I fired almost my entire staff. I figured, this way they CAN'T fire me - I am the only one left who knows what's going on!"

His strategy worked, but he feared his refuge would be short-lived. Coppola rushed to complete the entire project in under 65 days, with Paramount' executives on his tail the entire way.

"Looking back, at first I wondered how we were even able to finish the film. But now I know that it was the chaotic environment that contributed to the success of the project. We could have never achieved something so great without all that adversity in the mix."

"And so goes life", Coppola explained to me. "People spend so much of their time trying to avoid adversity. They fret and worry over it until it consumes them. I see adversity as part of life, and know that some of the greatest ideas, inspirations and life changing events occur in adverse environments. I look for adversity in my work, and in an odd way, sometimes even cherish it."

Francis Ford Coppola put it succinctly when he said, “The seeds of great success are often right in front of you, hidden in the ashes of adversity.”

Image: “But his shaggy haired, 'hippie' appearance did not win him many friends within the company…”
Posted by Geoff Pound at 9:33 PM 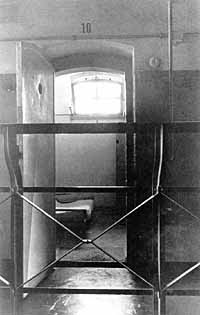 A prison cell, in which one waits, hopes … and is completely dependent on the fact that the door of freedom has to be opened from the outside, is not a bad picture of Advent.