What My Education is Doing to Me 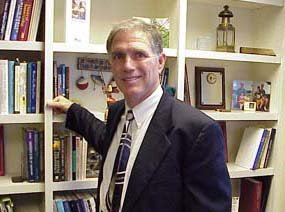 In a lecture on the role of the Christian College and University, Dr Mike Beaty gets autobiographical:

Sometime during that first semester at Ouachita, I ambled out of Dr. Berryman’s class, engaging him in a conversation about some topic he had raised in class, but also anxious to get to my dorm to get ready for a flag football game that afternoon.

Saying he wanted to chat with me about something important, at his suggestion, we left the Berry Bible building, and meandered toward a huge magnolia tree standing near Riley Library and took our seat on the concrete bench under it. At one pause in the conversation, Dr B, as I fondly called him, asked, “What are you going to major in, Beaty?” I answered, “Dr B, I don’t know. I really don’t know what I want to do after college yet, though I know I should.” He pooh-poohed the notion that I needed to have a career plan firmly in mind, suggesting that college was more than preparation for a career. No one had ever suggested that to me.

He said something like, “You obviously like philosophy. Why not major in it?” I responded, “Dr B, what would I do with it?” And he said, Mike, at this point, it is not important what you will do with it; what is important is what it is doing to you.”

I turned that thought over in my mind a few times and found I liked it a lot. Soon after, I declared my intention to major in philosophy with no idea that this decision would lead, in time, to my discovering my vocation as a Christian philosopher and educator.

Image: Dr Mike Beaty, Professor and Chair of the Department of Philosophy, Baylor University.
Posted by Geoff Pound at 3:06 PM Links to this post

Peace is Something You Make with Your Enemies 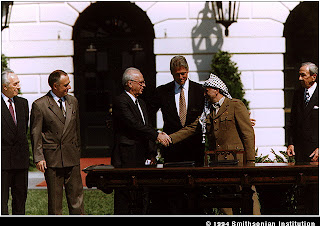 On September 13, 1993, the Declaration of Principles was signed by President Clinton, Yasir Arafat, and Yitzak [Rabin] on the White House lawn. The declaration stated the end of the “confrontation and conflict” between the state of Israel and the Palestinian people and laid the framework to achieve genuine reconciliation and a “comprehensive peace settlement” by setting forth the step-by-step process by which the Palestinians would be granted autonomy.

Did Yitzak intend to shake Yasir Arafat’s hand? Surely, he had mixed feelings—after all, this was the leader of an organization that had, over the years, taken the lives of countless Israeli civilians and soldiers. But peace is something you make with your enemies, not with your friends. And making peace means moving past bloodshed, beyond anguished memories. The look of discomfort on Yitzak’s face was unmistakable; he looked as if he’d swallowed something large and painful. He was shaking the hand of a man he said he would never dignify with direct contact. He was breaking a vow. How could he forget the victims of terror, even at this historic moment? Had it not been before the eyes of the world, he might not have felt so deeply conflicted. I imagine he was thinking, The whole world has heard me say never, and now I am…

After the handshakes, Yitzak addressed the crowd on the lawn, his people, the Palestinian people, and the television cameras of the worlds:

Today here in Washington at the White House, we will begin a new reckoning in the relations between peoples, between parents tired of war, between children who will not know war…

We have no desire for revenge. We harbor no hatred toward you. We, like you, are people—people who want to build a home, to plant a tree, to love, to live side by side with you in dignity, in affinity, as human beings, as free men. We are today giving peace a chance and saying again to you, ‘Enough…’

Let us pray that a day will come when we all will say farewell to arms.

At the conclusion of the ceremony, Yasir Arafat and Yitzak went down the first row of attendees, shaking hands with everyone. I was sitting in the center of the row. I turned left and shook the hands of the people on my left and then turned to the row behind me. I shook the hand of the Palestinian spokeswoman Hanan Ashrawi, who had played an important role in keeping the Palestinian-Israeli dialogue alive in 1991-1992—her joy was palpable.

At the end of the day, Yitzak was absolutely convinced he had done the right thing. Surely there were risks involved, but he realized they were risks we had to take. The signing had such a profound impact on the way Israel was perceived internationally, not even Yitzak could anticipate the dramatic extent to which this was to happen.

Image: “Did Yitzak intend to shake Yasir Arafat’s hand?”
Posted by Geoff Pound at 5:22 AM Links to this post 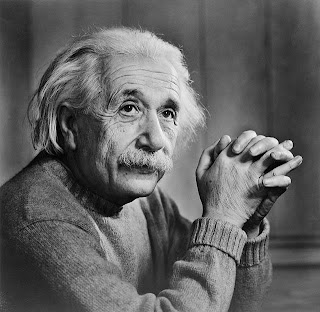 Albert Einstein had just administered an examination to an advanced class of Physics students.

As he left the building, he was followed out by one of his teaching assistants.

"Excuse me, sir," said the shy assistant, not quite sure how to tell the great man about his blunder.

"Um, eh, it's about the test you just handed out."

"I'm not sure that you realize it, but this is the same test you gave out last year. In fact, it's identical."

Einstein paused to think for a moment, then said, "Hmm, yes, it is the same test."

The teaching assistant was now very agitated. "What should we do, sir?"

A slow smile spread over Einstein's face. "I don't think we need do anything. The answers have changed."

Source: Thanks to Roy Petitfils for putting this story my way.

Image: Albert Einstein
Posted by Geoff Pound at 7:12 PM Links to this post