Things Caught Rather Than Taught 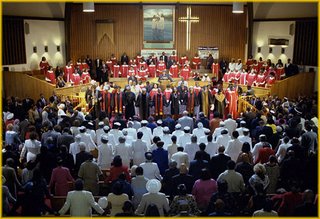 Preacher, Dr Jana Childers, in a sermon about ‘Saying Grace’, shares this experience about the way faith and other values are caught more than taught:

“A couple of years ago, at Allen Temple Baptist Church in Oakland, California, during a traditional African-American Good Friday service, I saw the grace of God extend.
In a lovely turnabout, the men of the congregation were providing the special music that day while the seven last words of Christ were being preached by seven women preachers. The men, some of them not technically old enough to qualify for the demographic category, were clearly getting a kick out of it.

I was, too, especially since my favorite baritone, Deacon Sellers, was scheduled to sing right after my sermon. I barely managed not to swoon each year when Deacon Sellers sang "The Holy City" and this year I was only glad I didn’t have to follow his song. Of course, there are not seven male soloists of the stature of Deacon Sellers who can get off from work on a Friday afternoon—even at a large, flourishing, wonderful church like Allen Temple—and so it was that some of the young baritones-in-training were given their first outing at this service.
I remember one young man who seemed to be eleven or twelve years old, who tremeloed his way through the first few bars of the assigned song, and who was a good two blocks out from the key the organist was in. The congregation was with him, though. "All right, now," I heard. "That’s right. Sing, child."

Gradually, I noticed a strengthening, and then a course correction. The young voice was encouraged by the congregation’s support, but there was more. The boy’s voice was being shadowed, it seemed to me, by a steady, stealthy voice. I looked around. In the choir loft a few yards behind the soloist, sat Deacon Sellers, his face and eyes averted. He just happened to be there, you know. Waiting his turn. I looked again. He was singing. Quietly, steadily, surreptitiously singing that green twelve-year old into key. Gradually, I realized that there were four or five men scattered through the large loft, also looking very casual, also singing.

There are some things about the Christian faith than can be taught. But the most important are caught, Paul reminds us. From moms and dads, from writers and speech teachers, and baritones....”