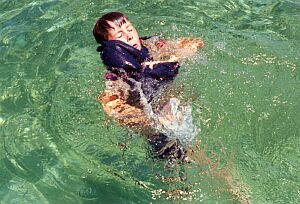 Friend and former colleague, Jack McFadyen, once told of a time when he was serving as a chaplain at an Army Camp in New Zealand.

He visited a man in hospital who was in a terrible state. The man told Jack this story.

Some years earlier he was wandering along a river bank. Further up the river there was a family having a picnic and they hadn’t noticed that their little boy had fallen into the water.

The man said he also noticed that a young friend of his, a policeman, had spotted this child, thrown off his boots and had dived into the water after the boy. Then he said, when they came down opposite me, I could see that the policeman was himself in difficulty.

So I took off my coat and I swam out to them and when I got there I discovered that the water was moving so swiftly that I couldn’t possibly rescue both of them. So I had to decide which one that I would attempt to rescue. Would I rescue the man or the boy?

He said: “I made my decision and I rescued one of them and from that day until this day people have been telling me that I made the wrong decision. I should have rescued the other one.”

Which one do you think he should have rescued? Why? [Please don’t scroll down until you have come to your answer and reasons!!]

The man did not have the luxury of lots of time nor did he have the benefit of an action replay. He made his decision. He was told that he had made the wrong decision and now he was in hospital years later a broken man.

With a smile, Jack McFadyen said to his audience, “You’re going to wonder for the rest of your life which one he rescued!”

Jack said that the man rescued the adult because he knew him and he was aware that he had a family who depended on him. He made his decision but after that he wasn’t sure.

Life is full of decisions. Some of them are trivial. Some of them are terribly important. Many of them will need to be made with urgency while the opportunity is knocking. Sometimes the consequences of our decision making are devastating.

How we need great wisdom, especially in making that complex decisions that face us in life.

Image: Picture from a life saving class.
Posted by Geoff Pound at 11:06 AM