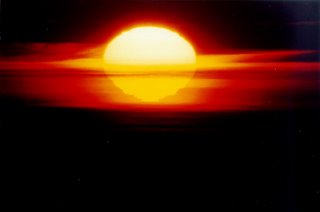 In his sermon, Whistling in the Dark, Frederick Buechner says:

“You have to be quiet to hear… We are always in some sort of endless, haggard dialogue with ourselves.

This makes me think of the greatest class I ever taught - a class at a boy’s prep school in New Hampshire. It was a late afternoon class and I remember driving to it from the beach, where I had been to whiff the sea air for a minute. As I drove towards town, to the west, away from the ocean, I noticed that the sun was just beginning to show signs of setting, sort of lemony colour in the sky.

Then I went up to the classroom. There were the fifteen or so boys gathered around the table waiting for whatever was going to happen. We waited and I could see yellow beginning to deepen a little bit -- the sun sinking a little bit. Then the bell rang and, normally speaking, I would have gotten up and started off with the lesson for the day. With this marvellously happy impulse never thought out, instead of starting out the class, I flipped the light switch off, which meant that we were suddenly sitting in deep dusk with the sun setting through the window. The room faced west.

It was a magnificent sunset. I can still see it. It was very orange, sort of a pumpkin-coloured sunset, with the branches of the trees and corners of the buildings black as soot against it. It turned from orange to crimson.

We sat there in absolute silence. That is the curious thing. You would have thought that in a room full of fifteen boys, somebody would have horse laughed or poked the other in the ribs or giggled or something like that but not at all. We sat there for as long as it took the sun to set without a word, without any sound at all, until finally the sun did set and we were sitting there in darkness.

I've thought since about what made that such a marvellous class and the sunset was almost the least of it. I am not saying something sentimental about sunsets. The sunset was marvellous. A lot of it was the silence, which we usually find so awkward. We're embarrassed; we're afraid of silence because we use words so often not to reveal who we are but to conceal who we are. We hide behind our chatter. In silence a kind of sense of being stripped naked. Perhaps because we couldn't see our faces, perhaps because it was a kind of silence, we were all contributing to in a way. It was not an awkward silence. It was a sort of blessed silence. Silence was part of it; a sense of each other's presence was part of it; we were all there together, all participating in this silence.

There was a wonderful sense that nothing had to be done about it. No test was going to be given; no questions were going to be asked; nothing like that. Just to be there and see what there was to be seen, made it a deeply moving thing. The sense also that we were seeing not just the sun set gorgeously, but we were seeing a day of our lives come to an end without sadness, with a kind of lovely gentleness, made it special. We only have so many days and here was one of them. It was beautifully ending.

It got dark. The sunset was over and I thought to myself, "This is a religion class and I'm a religious teacher. Perhaps I should make some edifying remark about the sunset and draw some religious conclusion from it."

By an impulse as happy as the one which led me to turn off the light, I said not a word, thank heavens, except "Go home." And, home they went. For that reason, it was a very good class."

Image: Sunset
Posted by Geoff Pound at 11:38 AM