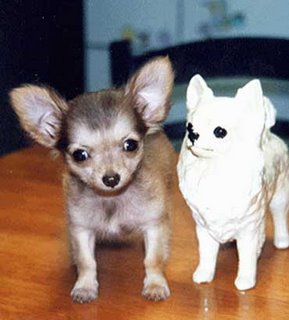 Toward the end of my year itinerating around the state of Victoria as President of the Baptist Churches, I visited a small church which holds their evening services in a home. That night it was held in the home of a disabled woman who got along very fast in her motorised wheelchair. She greeted us at the door along with her two playful Chihuahuas.

The pastor commenced the service with thirty minutes of singing to the accompaniment of his guitar. While we were singing the golden oldie ‘It only takes a spark to get a fire going’ the male and female dogs began to get frisky in the middle of the circle.

A verse later one Chihuahua was mounting the other and jigging around almost in time to the music! It was absolutely hilarious, these two Mexican dogs doing the tango while we were singing, "What a wondrous time is spring..."

The owner saw what was happening and could not intervene because the battery on her wheelchair was being recharged. However, when she realized that her dogs' activities were not conducive to worship, she unplugged her wheelchair and came hurtling toward the dogs, attempting to break them up. As she chased them around the room these dogs, which seemed glued to each other, simply moved to a different piece of the carpet. By this time all the worshippers were killing themselves with laughter.

In desperation, the woman put the wheelchair into reverse, then slammed it into forward gear and retreated into the kitchen. She soon emerged with a bag of sweets which she shook and rattled -obviously the tried and trusty trump card. This ploy parted the dogs, proving perhaps that food is more attractive than sex.

When we reached the climax it was too difficult to sing the words, “I wish for you my friend the happiness that I’ve found.” It was a challenge preaching after such a spectacular floorshow!

Image: A couple of Chihuahuas or is that one on the right a toy?
Posted by Geoff Pound at 7:22 AM