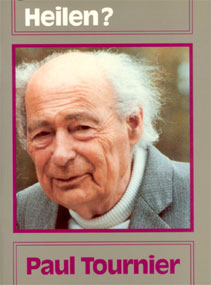 Listen to Eugene Petersen write of the time he and his wife attended a lecture by Paul Tournier and discovered an important new image for his life and work:

“Tournier was a Swiss physician who at midlife shifted his medical practice from examining rooms and surgeries to his living room. He left a medical practice that was focused entirely on the body and embraced a healing vocation that dealt with the whole person—body, mind and spirit. He wrote many books, and I have read them all. They were not great books—anecdotal in style, personal in story—but an appealing spirit of discerning grace permeated everything he wrote.”

“Driving the 20 miles home my wife and I were commenting appreciatively on the lecture, when she added, ‘Wasn't that translator great?’ I said, ‘What translator? There wasn't any translator.’ She said, ‘You're kidding me. He was lecturing in French, and you don't know 20 words of French. Of course there was a translator.’ And then I remembered her as she stood just behind Tournier's shoulder, unobtrusive, and translating his French into my English. She was so modest that I forgot she was there.”

“And there was something about Tournier himself. During the lecture I had a growing feeling that what he was saying and who he was were completely congruent: his long life in Switzerland and his lecture in Baltimore were the same. Just as the translator was ‘assimilated’ to the lecturer, her English words carrying the meaning and spirit of his French words, so his words were at one with his life—not just what he knew and what he had done, but who he was.”

“The transparency of the man was a memorable experience. There was no dissonance between word and spirit, no pretence. Later on I remembered what T. S. Eliot had said about Charles Williams. Some people are less than their works, some are more. Charles Williams cannot be placed in either class. To have known the man would have been enough, to know his books is enough. He was the same man in his life and in his writings. That's the sense I had that day with Tournier. He wrote what he lived. He lived what he wrote. He was the same man in his books as he was in person.”