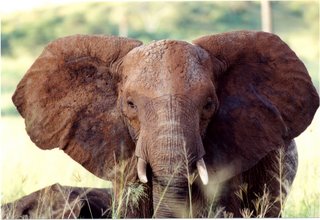 I wonder if you saw any of the reports on the way that animals fared in the Asian Tsunami?

At Sri Lanka’s wildlife Park in Yala which keeps elephants, buffalo and monkeys, no animal corpses were found yet the human devastation there was as tragic as elsewhere.

Only 30 of the 250 tourist vehicles that entered the park that Sunday returned to base. It seems the animals sensed the wave coming and headed for higher ground.

In Thailand it was the same before the wave struck. Hermit crabs were seen scrambling up the beaches. Elephants near the sea went crazy as they bellowed, broke their tethers and headed upland.

Zoologists have been writing about the animals’ heightened capacities to hear a quake and sense sound waves and vibrations.

People have been asking: "What about humans—where were our red flags?" They’ve been saying: “We humans can feel infrasound."

But sadly, we don’t always pay attention to the information we get.