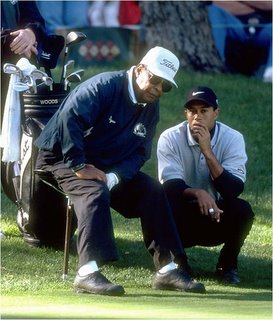 Tiger Woods is today mourning the lost of his father Earl. The champion golfer has said repeatedly that his father has been the biggest influence on his life and career. Earl Woods is the one most responsible for the tiger burning bright.

The tributes flowing in reveal the way the doting father groomed his son to be a great golfer from such an early age. Earl has been criticised many times for the pressure he put on his son but the father said, “I’ve always been more determined to raise a good son than to raise a good golfer.”

The video footage of the golfer with his Dad provides compelling evidence of the great love between the two men. It is a wonderful commendation of the vital influence a parent can have.

The bestowal of pleasure by a parent on a child is such an amazing gift.

Isn't this the number one item on the agenda when the little creature is thrust out of the womb? Where am I? Will my needs be met as adequately as they were in my mother's womb? How am I regarded in this place? Is it well that I be here? Is my presence valued and welcomed or deplored and resented?

These are the issues that probably dominate the dawning consciousness of a new born child and they continue through words that are spoken, the way a child is touched and the emotional tone of the whole atmosphere that surrounds this new beginning.

And this basic attitude, whether the parents value the child or not, more than anything else shapes or misshapes the child's self-understanding.

Happy is the child who encounters such affection early in life.

Sam Keene was one such child. As he was visiting with his father just before the older man died, he had occasion to look back over their life together and thank his father for the excellent job he had done.

"You have always been there whenever any of us children needed you. And across the years, you have given us the best single gift that any parent could give- you took delight in us.”

“In all sorts of ways you let us know that you were glad we were here, that we had value in your eyes, that our presence was a joy and not a burden to you."

When I read that tribute I expressed grateful thanks for my own wonderful Dad. My mind then went to the baptism of Jesus and those timeless words: "This is my beloved son in whom I am well pleased." The sustaining words of a father bestowing pleasure on his son.

As we pray for Tiger in his great loss, we rejoice with him in the memory of a father who, with his mother, nurtured his superb character and we give thanks for the significant people in our lives who have anointed us with delight.