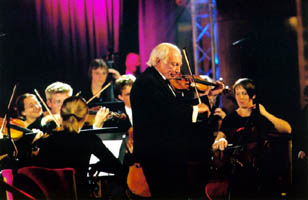 Not long ago one of the world’s great violinists, Isaac Stern, was playing a Mozart violin concerto with the New York Philharmonic Orchestra. Midway through the first movement Isaac Stern had a lapse of memory. He forgot the music.

Immediately he stopped playing, he went over to the conductor and he asked if he and the orchestra could prepare to begin the concerto again, and then turning to the audience this remarkable musician apologized for his mistake then started the music all over again.

A critic reviewing the incident said, “The performance began again from the beginning thus allowing the audience to hear Mozart un-maimed.” He said, “Although Isaac Stern could have vamped for a while until his memory got back on track, his was surely a more honest and more musically satisfying solution. A man of his ability could have fooled his audience and covered up his mistakes and yet his faithfulness to Mozart and to his music demanded of him a clear accounting of his error and a desire to start all over again.”

The violinist didn’t cover up. He acknowledged his mistake to those watching and listening. He started over again, played it the right way and gave to his audience the gift of his music.

Image: Isaac Stern
Posted by Geoff Pound at 11:57 AM