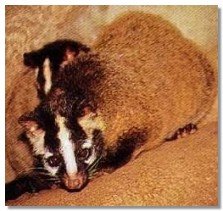 Don’t you like the rags to riches stories? If there’s any story style I like better it is ‘the ‘rejection to royalty’ category. The Easter story is the supreme example where ‘the stone that was rejected has become the cornerstone’!

More contemporary examples include the story about the publishers who rejected the manuscript, ‘The Spy that Came in From the Cold’ with the accompanying note saying: “John Le Carré has no future.” Or the one where the little known author, Ian Fleming, is told, “James Bond will never sell.” Or the time when George Orwell’s ‘Animal Farm’ was rejected, with the terse explanation: “Animal stories don’t sell in the USA.”

My latest ‘rejection to royalty’ story comes from the Philippines (so I keep it in a Manila folder).

The Philippines has recently discovered it produces one of the world’s most expensive and coveted kinds of coffee. But it comes from a very unusual source. It comes from the cat-like animal called the palm civet. Being nocturnal we would expect the coffee to be a dark roast.

Civets are related to the mongoose. They are usually regarded as pests so they are hunted for their meat or just shot to get rid of them.

The coffee comes from the droppings of the civets! So, not only from a rejected animal but from its rejects comes the best coffee in the world….They probably call this label ‘Civet Gold’ or a ‘Civetchino’.

If you’re keen to get to the bottom of this story, here is what I’ve discovered.

The civets have a taste for the sweet, red coffee cherries that contain the coffee beans. The beans then pass through the civet whole, fermenting in their stomachs and this is what gives the coffee its unique taste and aroma. This is not instant coffee. The civet process is a slow roast!

Professional coffee lovers are starting to track down the trail of civet droppings in the mountains south of Manila. As for the locals, this has been their best, kept secret. In the Philippines, only 500kg are produced each year and the roasted beans sell for more than $115 a kilogram.

Isn’t this amazing? The world’s best coffee is being brewed from the backside of a furry mammal! Now, instead of the animal being hunted and despised there are probably signs all over Manila saying ‘Please replace your civets’.

This may not be everybody’s cup of tea but give this story time to percolate. Sometimes the things and the people who are rejected, in time, turn out to receive the royal treatment.