Three Cups of Tea in A Thousand Splendid Suns 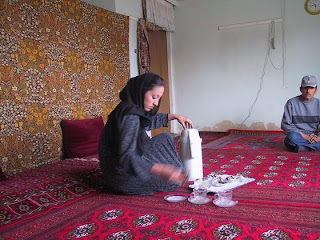 The Pakistani and Afghani custom of drinking three cups of tea, that is told by Greg Mortensen and which makes the title of his book is wonderfully reflected in Khaled Hosseini’s, A Thousand Splendid Suns.

Maraiam and Laila are the wives of Rasheed and for many reasons they are not getting on with each other. In particular, childless Mariam is jealous of the younger wife, Laila, who has produced a baby called Aziza. The two women exist in this Kabul house avoiding each other.

In the middle of one night there are signs that the relationship is thawing and this becomes the turning point for a bond that grows very strong.

When Laila gets up and goes down to the kitchen she finds Mariam still hard at work. Despite the anxiety the two of them feel, Laila makes a conciliatory move. She says:
“The Chinese say it’s better to be deprived of food for three days than tea for one.”
Mariam gave a half smile. “It’s a good saying.”
“It is.”
“But I can’t stay long.”
“One cup.”

They sat on folding chairs outside and ate halwa with their fingers from a common bowl. They had a second cup, and when Laila asked her if she wanted a third Mariam said she did. As gunfire cracked in the hills, they watched the clouds slide over the moon and the last of the season’s fireflies charting bright yellow arcs in the dark. And when Aziza woke up crying and Rasheed yelled for Laila to come up and shut her up, a look passed between Laila and Mariam. An unguarded, knowing look. And in this fleeting, wordless exchange with Mariam, Laila knew that they were not enemies any longer.

Image: Preparing the tea in Afghanistan.
Posted by Geoff Pound at 12:15 PM