Thanksgiving Generosity When Vegetables Are Free 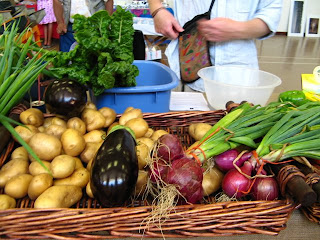 A farm couple received a big surprise when they opened their fields to anyone who wanted to take away vegetables left over from the harvest: 40,000 people showed up.

The fields of the couple, Joe and Chris Miller, were picked so clean Saturday that a second day of harvesting was canceled Sunday, The Denver Post reported.

She said she expected 5,000 to 10,000 people to show up Saturday to collect potatoes, carrots and leeks. Instead, an estimated 11,000 vehicles snaked around cornfields and backed up more than two miles. About 30 acres of the 600-acre farm, 37 miles north of Denver, became a parking lot.

“Everybody is so depressed about the economy,” said Sandra Justice of Greeley, Colo., who works at a technology company. “This was a pure party. Everybody having a great time getting something for free.”

Ms. Justice and her mother and son picked about 10 bags of vegetables.

Ms. Miller said she and her husband opened the farm for the public harvest for the first time this year after hearing reports of food being stolen from churches. It was meant as a thank-you for customers.

The farm’s operations manager, Dave Patterson, said that in previous years the Millers had allowed schoolchildren and some church groups to harvest their own food on the farm in the fall.

He estimated that about 600,000 pounds of produce was harvested Saturday.

Philosophy of Abundance
Now read Harry Cook’s Thanksgiving essay inspired by the above story that begins:

“Having just finished an article about yet another prospective multi-billion dollar federal bailout -- this time of Citibank -- I turned the page of my New York Times and noticed tucked away near the bottom of a column this headline: "Farm's Open Harvest Draws 40,000 in Colorado."

My spoonful of Shredded Wheat was held, poised between bowl and lip, as with amazement I scanned the story's nine terse paragraphs…

To continue, here is the link.