Feathery Fable is For the Birds 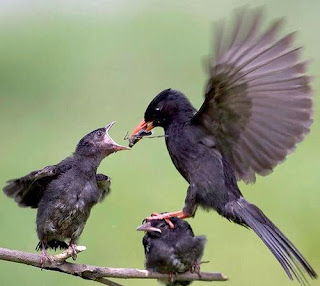 A mother bird and her three fledglings came to the bank of a river, too wide for the young ones to cross on their own.

Taking the first fledgling onto her wing, the mother bird began to carry him across, and while over the middle of the river she asked him the following question: “My dear son, when I am old and too feeble to fly far, will you carry me across?” Promptly and respectfully, her son replied, “Of course, mama,” whereupon the mother bird dropped him into the water below to drown.

Repeating the test on her next fledging, she elicited the same response, and so dropped him, too, into the waters below.

Gathering up her last fledgling, the mother bird administered her test one last time: “My dear son, when I am old and too feeble to fly far, will you carry me across?” Unlike his brothers, the last fledgling slowly but thoughtfully replied, “No mother, I will not do it for you, but I will do it for my own children.” The mother bird, now happily assured of her future, flew her son across the river and lovingly deposited him on its distant shore.

Source: Anon. Thanks to Alex Tang for sharing the story.

Image: Chicks have their uses.
Posted by Geoff Pound at 11:37 AM