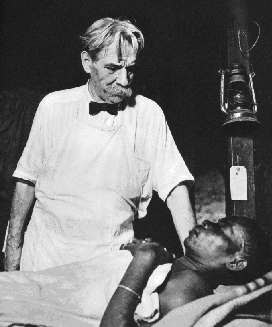 Frederick Franck went to work as a dentist with Albert Schweitzer in Lambarene for several months, after which he wrote a book on his days with the great man. Here is an excerpt:

“Here was the extraordinarily gifted son of a small-town Lutheran pastor who has developed his immense potentialities to their utmost limit—as a revolutionary theologian, as a profound, yet practical philosopher, and as a great organist and musicologist who by the age of thirty had written a definitive study of Johann Sebastian Bach.”

“Then, suddenly, he gave up an uncommon multiplicity of brilliant careers, resigned from his professorate at the University of Strasbourg and decided to study medicine. This decision came after reading a plea from the Paris Mission Society for help in Equatorial Africa, where the people were in desperate need of a medical service that was totally lacking.”

“Becoming a doctor, he reflected, would enable him to ‘work without having to talk. For years now I have been giving of myself in words, but in this new commitment, I’ll not be a talker about the ‘Religion of Love’, but one who puts it into practice.’”

“Schweitzer gained notoriety as the unorthodox author of ‘The Quest for the Historical Jesus’ (1910) which shocked both liberal and conservative Protestants. Nonetheless, its concept of a ‘Religion of Love’ laid the foundation for the exceptional medical missionary he was to become. As the price for cooperation from the Paris Mission Society, Schweitzer had to accept its condition that he would neither preach nor officiate. In my understanding, this was precisely in line with Schweitzer’s intention.”

“He became the atypical missionary, who, in his fifty years of medical practice in the jungle, did not convert a single one of the ‘heathens’ he took care of day and night. He simply wanted to be a loving witness to the ‘Religion of Love’, render a limitless service of love and compassion in the spirit of its founder, and be a Christic presence, rather than a denominational ‘Christian’, in the heart of darkness and human suffering.”