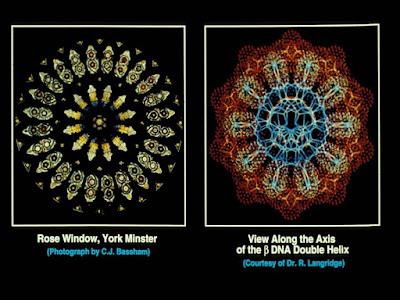 “PRESIDENT OBAMA has nominated Francis Collins to be the next director of the National Institutes of Health. It would seem a brilliant choice.

“Dr. Collins’s credentials are impeccable: he is a physical chemist, a medical geneticist and the former head of the Human Genome Project. He is also, by his own account, living proof that there is no conflict between science and religion.”

“In 2006, he published ‘The Language of God,’ in which he claimed to demonstrate “a consistent and profoundly satisfying harmony” between 21st-century science and evangelical Christianity.”
The article, Science is in the Details’ about Francis Collins by Sam Harris is published at the New York Times for paid up members but it appears fully on the web site of the author.

Awesome Pictures from the Book of Life
Author and speaker Ravi Zacharias, tells this amazing experience in his book, ‘The Grand Weaver’:

Some time ago I had the privilege to speak at a conference at Johns Hopkins University on the theme “What Does It Mean to Be Human?” Before my address, Francis Collins, the director of the Human Genome Project and the co-mapper of human DNA, presented his talk. He spoke of the intelligibility and marvel of the book of life, filled with more than three billion bits of information. In a strange way, he became both the subject and the object of his study, both the designer and the design of his research. Extraordinary thoughts swarmed within me as I listened, virtually tuning in and out of the talk in order to reflect on the wonder of it all.

In his last slide, he showed two pictures side by side [Pictured above. CLICK TO MAGNIFY]. On the left appeared a magnificent photo of the stained-glass rose window from Yorkminster Cathedral in Yorkshire, England, its symmetry radiating from the center, its colors and geometric patterns spectacular—clearly a work of art purposefully designed by a gifted artist. Its sheer beauty stirred the mind.

On the right side of the screen appeared a slide showing a cross section of a strand of human DNA. The picture did more than take away one’s breath; it was awesome in the profoundest sense of the term—not just beautiful, but overwhelming. And it almost mirrored the pattern of the rose window in Yorkminster. The intricacy of the DNA’s design that pointed to the Transcendent One astonished those who are themselves the design and who have been created semi-transcendent by design. We see ourselves only partially, but through our Creator’s eyes, we see our transcendence. In looking at our own DNA, the subject and the object came together.

We can map out the human genome and in it see the evidence of a great Cartographer. We can plan and now see a great Planner. We can sing and now see poetry in matter. We speculate and see the intricacies of purpose. We live, seeing the blueprint of life. And we die, but we can look through the keyhole of life.

At Johns Hopkins that day we saw the handiwork of the One who made us for himself.

Postscript by Geoff Pound
Ravi’s vivid description left me wanting to see more. I Googled ‘Francis Collins and discovered more information about him and his work. I sent him this story and asked if he could send me the pictures.

Francis replied with the pictures saying, “I had not previously seen this powerful excerpt from Ravi Zacharias’ book. Attached is the image that stirred him to such inspiring words.”

I am grateful to Francis for permission to post these pictures and to Ravi for penning his reflections.

Sources
Francis Collin’s Biography
Ravi Zacharias
The Grand Weaver: How God Shapes us through the Events of our Lives, Zondervan, 2007. Publishing details, review and a fascinating interview with Ravi.