Elizabeth Gilbert and Tom Waits on Capturing the Creative Urges 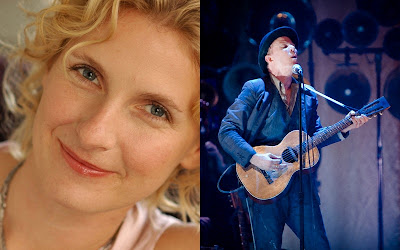 In a TED Talk on Nurturing Creativity, author Elizabeth Gilbert tells how to capture and contain creativity in constructive ways:

“And what is that thing? And how are we to relate to it in a way that will not make us lose our minds, but, in fact, might actually keep us sane?”

“And for me, the best contemporary example that I have of how to do that is the musician Tom Waits, who I got to interview several years ago on a magazine assignment. And we were talking about this, and you know, Tom, for most of his life he was pretty much the embodiment of the tormented contemporary modern artist, trying to control and manage and dominate these sorts of uncontrollable creative impulses that were totally internalized.”

“But then he got older, he got calmer, and one day he was driving down the freeway in Los Angeles he told me, and this is when it all changed for him. And he's speeding along, and all of a sudden he hears this little fragment of melody, that comes into his head as inspiration often comes, elusive and tantalizing, and he wants it, you know, it's gorgeous, and he longs for it, but he has no way to get it. He doesn't have a piece of paper, he doesn't have a pencil, he doesn't have a tape recorder.”

“So he starts to feel all of that old anxiety start to rise in him like, ‘I’m going to lose this thing, and then I'm going to be haunted by this song forever. I’m not good enough, and I can't do it.’ And instead of panicking, he just stopped. He just stopped that whole mental process and he did something completely novel. He just looked up at the sky, and he said, ‘Excuse me, can you not see that I'm driving? Do I look like I can write down a song right now? If you really want to exist, come back at a more opportune moment when I can take care of you. Otherwise, go bother somebody else today. Go bother Leonard Cohen.’”

“And his whole work process changed after that. Not the work, the work was still oftentimes as dark as ever. But the process, and the heavy anxiety around it was released when he took the genie, the genius out of him where it was causing nothing but trouble, and released it kind of back where it came from, and realized that this didn't have to be this internalized, tormented thing. It could be this peculiar, wondrous, bizarre collaboration kind of conversation between Tom and the strange, external thing that was not quite Tom.”

“So when I heard that story it started to shift a little bit the way that I worked too, and it already saved me once. This idea, it saved me when I was in the middle of writing ‘Eat, Pray, Love,’ and I fell into one of those, sort of pits of despair that we all fall into when we're working on something and it's not coming and you start to think this is going to be a disaster, this is going to be the worst book ever written. Not just bad, but the worst book ever written. And I started to think I should just dump this project. But then I remembered Tom talking to the open air and I tried it. So I just lifted my face up from the manuscript and I directed my comments to an empty corner of the room. And I said aloud, ‘Listen you, thing, you and I both know that if this book isn't brilliant that is not entirely my fault, right? Because you can see that I am putting everything I have into this, I don't have anymore than this. So if you want it to be better, then you've got to show up and do your part of the deal. OK. But if you don't do that, you know what, the hell with it. I'm going to keep writing anyway because that's my job. And I would please like the record to reflect today that I showed up for my part of the job.”