World Café: A Creative Process for Telling Stories for Change 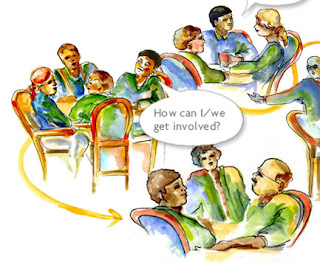 Introduction
This is an edited version of an article by Jay Cross entitled ‘Conversations’. He writes about conversation, stories, the World Café and his experience of using this process to revolutionize education in the United Arab Emirates.

Conversations
Conversation has magic to it. Dialogue is the most powerful learning technology on earth. Conversations are the stem cells of learning, for they both create and transmit knowledge. Frequent and open conversation increases innovation and learning. Schooling planted a false notion in our heads that real learning is something you do on your own. In fact, we all learn things from other people. People love to talk. Bringing them together brings excitement.

Stories
Stories are an element of conversation (so long as you don't repeat them word for word). They communicate patterns and give meaning to experience. They are important because we know more than we can tell. They also hold communities together. They are the buzz of the beehive.

World Café
The best approach I have seen for creating value from people's collective intelligence and igniting innovation is the World Cafe.

The World Cafe is a process for fostering conversations that matter. If conversation is the way people create value and innovate in organizations, it is worthwhile to host the best conversations we can.

People spend most of their time at work or at home. Work is a demanding, pressure-packed, rats-in-the-maze race with the clock to get the job done. Home is a comfortable, private space for sharing time with family and individual interests. Neither work nor home, a World Cafe is a neutral spot where people come together to offer hospitality, enjoy comradeship, welcome diverse perspectives, and have meaningful conversations.

First Experience of World Cafe
My first experience with the World Cafe was a meeting of 30 people convened by Brook Manville, McKinsey's first director of knowledge management and later chief Darning officer at Saba, to pin down the meaning and utility of the term 'human capital.' After a morning of thrashing through whether human capital implied that people were property and other cerebral issues, Eric Vogt, the founder of Communispace Corporation, proposed that instead of the usual call to break into small groups, discuss, and then reconvene to talk what we'd talked about, perhaps we should have a World Cafe session.

We covered each of four tables with flip chart paper, and someone assigned each table a different aspect of human capital to discuss. People talked among themselves for ten minutes, after which everyone but the table "hosts" switched tables. Each host summarized the discussion thus far, referring to scribbles and diagrams left over from the previous crowd. The groups continued contributing to the conversations, by now searching for patterns and linkages. We rotated once more and then described the fresh insights we had gained.

Since then I have teamed from World Cafe sessions, with executives and with close friends. Inevitably, I left with new approaches that I would not have come up with on my own.

Origins of World Cafe
The World Cafe started in 1995, when organization development consultants Juanita Brown and David Isaacs were getting ready to host the second day of a discussion with two dozen visitors at their house on the slopes of Mt. Tamalpais in Mill Valley, California. Rain was pouring down. While Juanita prepared breakfast and coffee, David arranged TV tables around the living room. A pal said it was beginning to look like a cafe, but they needed tablecloths; sheets from a flip chart sufficed to cover each table. The friend put a "Cafe" sign on the front door.

Conversation began spontaneously, and people began to draw on the cafe "tablecloths." Excitement built. Someone suggested switching tables to find out what the others were talking about. The energy level rose. After three rounds of conversation, the group shared their drawings and realized they had tapped into their collective intelligence. The World Cafe was born. It works. But was it appropriate for exploring opportunities to revolutionize education in the UAE?

Brown and Isaacs recently published a wonderful book, ‘The World Cafe: Shaping Our Futures Through Conversations That Matter’. When you decide to host your own cafes, buy the book. For now, I'm going to borrow from it heavily.

The World Cafe technique is best suited for sharing knowledge and stimulating innovative thinking around real-life issues and questions; the UAE situation filled that bill. The cafe is good for conducting an in-depth exploration of key challenges and opportunities, also what we wanted to do. The cafe engages people meeting for the first time in authentic conversation. In the UAE, we had not only strangers, but Emiratis, Italians, Americans, Saudis, Austrians, British, Chinese, and Norwegians, among them government officials, professors, vendors, consultants, and school teachers. There was a fit.

The World Cafe is one of many ways to foster authentic, purposeful conversations. Others are salons, study circles, Appreciative Inquiry, Open Space, strategic dialogues, and wisdom circles. All of these techniques build on similar design principles [Brown & Isaacs, 2005]:

* Set the context. Clarify the purpose and broad parameters within which the dialogue will unfold. Remind participants that they are invited to participate in authentic, active conversation rather than be a passive audience.

* Explore questions that matter. Focus collective attention on powerful questions that attract collaborative engagement. Be open and non-judgmental, and engage aspirations, not problems. Genuine questions are those we don't have answers for.

* Cross-pollinate and connect diverse perspectives. Use the living-system dynamics of emergence through intentionally increasing the diversity and density of connections among perspectives while retaining a common focus on core questions.

* Listen together for patterns, insights, and deeper questions. Share attention in ways that nurture coherence of thought without losing individual contributions. Intelligence comes from Latin for "gathering understanding in between." Reflection is the heart of the matter. Leave room between the notes to hear the music of collective wisdom.

Experimenting With World Café in the UAE
The day before the eMerging eLearning conference was to begin in 2005, a group of us met in the library of the college where the event would be held. This is not a typical library. There's lots of open space, plenty of sunlight, many tables to sit at, and computers galore. To convert the library into a cafe, we pulled together eight tables and put a flip chart "tablecloth" on each. To make things hospitable, we put flowers on each table. I'd hoped to offer coffee, but the library Starbucks was closed for renovations. I'd also hoped for music to create a mood, but students were studying in other parts of the same large room.

The toughest part of designing an effective World Cafe is figuring out the right question to start things off. You don't want to stifle free thinking or include your own bias. Six of us wrangled over the appropriate conversation for forty-five minutes. Some wanted structure; others wanted free form. Some were concerned with having demonstrable outcomes; others wanted to extract the wisdom of the group, expecting it to be messy. I called for a breather.

We took up the topic of the question again at dinner. Discussion was rich. We were learning about the World Cafe process itself as we noodled on the best catalyst. "How do they become what they want?" "What does the ideal graduate look like?" "If you had a magic wand, what sort of learning experiences would you create?" "If you could build the nation's K-12 system, starting with a blank slate, what would you do?" "What should a graduate be able to do?" "How would you create a way for today's youth to lead more fulfilling lives?" We had our arms around the issues; I suggested we leave the final wording to two of our party, who would be leading the sessions the next day.

After lunch the following day, several dozen people sat down in our cafe. Our moderator explained what we were doing and asked the groups to talk about what questions they would want answers to in creating a better educational structure in the UAE.

My table got off to a roaring start. We wanted to ask about the product, that is, the graduates: What values would they have? What job skills? What life skills? How would they reconcile high hopes and current realities? After ten or fifteen minutes, we rotated to different tables.

Excitement was building. Our session in the library began to capture the energy that Juanita Brown and David Isaacs experienced when rain led to the first World Cafe experience:

The World Cafe reintroduces us to a world we have forgotten. This is a world where people naturally congregate because we want to be together. A world where we enjoy the age-old process of good conversation, where we're not afraid to talk about things that matter most to us. A world where we're not separated, classified, or stereotyped. A world of simply greeting, free from technology and artificiality. A world that constantly surprises us with the wisdom that exists not in any one of us but in all of us. And a world where we learn that the wisdom we need to solve our problems is available when we talk together.

It was my turn to give a presentation downstairs, so I left at this time, re-joining the second cafe right before closing time. I returned to find people suggesting how we might visualize the discussions.

More people came to a follow-up panel session the next day. Dr. Kamali had highlighted the activity in his summary of the day. Conversations at the tables began spontaneously. Our moderator told us what had come the day before and explained that we had put sheets containing graphics picturing the day on three tables: "Today's Challenges," "What We Need to Do," and "Future Goals."

We invited people to take a look and talk about what they'd seen. Then they were to write their own ideas on sticky notes and stick them on the tables. The moderator would call time-out after three minutes. People excitedly flocked to the tables. New ideas were flowing fast and furious. We announced they had another ten minutes.

Beehive, Buzz and Honey
An effective community of practice is like a beehive. It organizes itself, buzzes with activity, and produces honey for the markets.

Conversations take place among people with shared interests, that is, communities.

Image: World Café graphic.
Posted by Geoff Pound at 8:41 AM